With a line up of 6 A4 class streamlined pacific steam locos, I had to make the journey to Shildon. Two of the locos are normally resident abroad, in Canada and the USA, so this was a one off opportunity.

We drove there on Saturday morning when the weather was not too kind, not raining, but very cold and overcast. I had a ticket for a lecture on the period when the engines were in mainline service and that was both interesting and had the advantage of taking place in a warm room! My wife chose to look around the shops in Bishop Auckland and later appeared, partially frozen, at the museum.

Later the crowds descended and there was a long wait to get into the museum building, I decided not to bother, but took a photo from outside the perimeter fence.

It appeared that three locos were in steam, with 60007 Sir Nigel Gresley being used to give people brakevan rides along a short stretch of track. 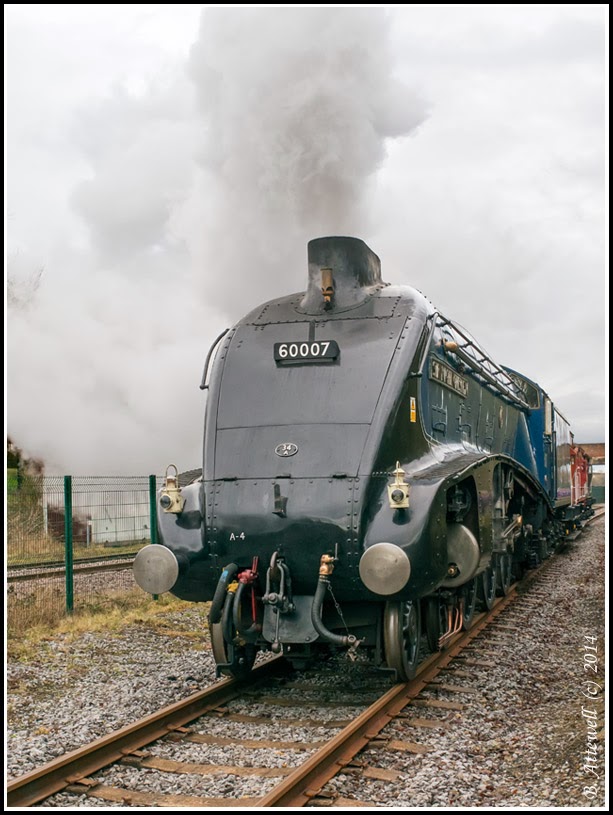 60007 Sir Nigel Gresley on brakevan duty
Nerds such as me know that shedplate 34A refers to Kings Cross! 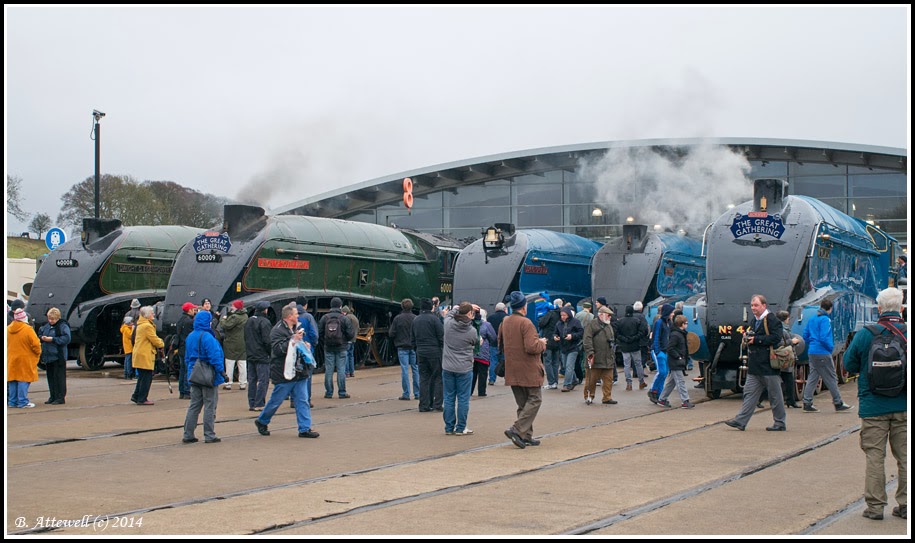 I recall standing on a platform of Newcastle station with my grandfather, circa 1960, when he tried to persuade the driver of an A4 to let me onto the footplate; sadly it didn't happen. I have since taken my grandson onto the footplate of Mallard, an easier ask on a gala day at York museum.

I also remember furtively sneaking around Gateshead works a few years later when there was an A4 in for a minor repair. One of the fitters remarked that it had been there for so long that there was grass growing under the wheels.

Another memory from that era was that of trainspotting at the backwater of East Boldon, when there was nothing but a dreary procession of diesel multiple units and steam powered coal trains. The level crossing gates closed, and through trundled A1 pacific Great Northern.  Just as we were rejoicing, and not noticing that the crossing gates had remained closed, an A4 powered train came through in the opposite direction. One of the highlights of early 1960s life!

Glad to have seen the  line up of these lovely machines, but equally glad to get into my nice warm car and drive home!

I need to get out of the house and walk or cycle to keep fit, and my regular walk involves crossing the river Wear, climbing Penshaw hill, visiting the monument, and then maybe walking through Herrington Country Park.

The park is a great facility, situated on land reclaimed from the site of Herrington pit, it provides an  informal landscape with lakes, grassed areas,  an amphitheatre and various sculptures. There are always people there, walking dogs, sailing boats or feeding the birds, while the park is used for sporting and other outdoor events.

The cycling charity Sustrans is opening a Bike Hub this year, enabling novice or uncertain cyclists to practice in a safe environment.

This day the weather was pretty grim, but a brisk walk up to Penshaw soon warmed me up, and then, while strolling across the park, I saw a flight of four swans cross overhead before landing in the largest lake.

This gentleman was feeding the swans. I've seen people do that plenty times, but I've not see a wild swan take food from a person's hand before. 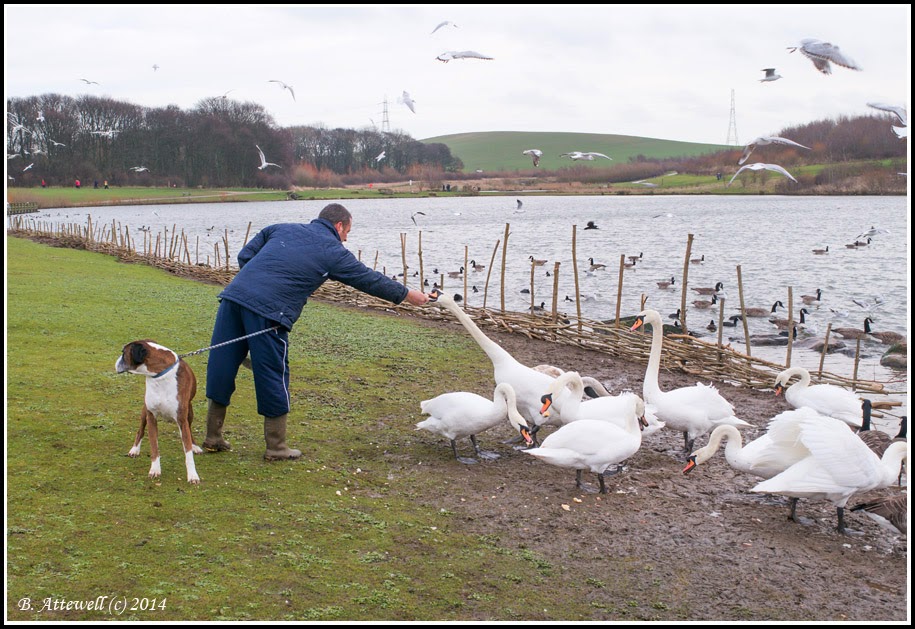 I also saw a man riding a bike and towing a child's trailer in which was seated a large dog; he had another dog running alongside. He was later seen sharing a scone from the park's cafe with his two pets.