In an earlier epistle I listed a number of methods for shooting tall buildings and reducing or eliminating converging verticals. I listed the technique of stacking several images but noted that I had not tried this method.

Well I have now given it a go and have been reasonably impressed with the outcome, see for yourself below. 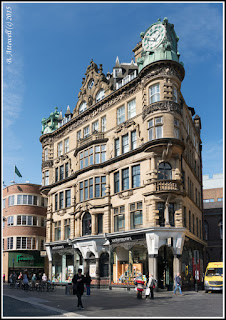 This is the Emerson Chambers building in Newcastle upon Tyne, situated at the head of Grey Street and currently occupied by Waterstones bookshop.

I used a Sony NEX 6 camera fitted with the standard Sony 16-50 zoom lens at about 28mm focal length ( 42 mm equivalent full frame). The combined photo used 5 shots, starting at the base working upwards with a healthy overlap between them.

The images were developed in Lightroom, with the only adjustment being a standard lens profile correction.

The developed images were transferred to Photoshop (CS4) as 16 bit TIFF files, and two different methods of combining them were tried.

1) The easiest way to do this is to use the File Automate Photomerge command, selecting all of the currently open images. This did a job. The main building was not too bad but there was some weird colouration in the sky while the buildings to the rear right were well distorted.

2) The next method is a tad more complex, but produced a better result.

I selected and copied all of the images over to the base layer (the bottom of the building) so as to obtain a layer stack of images. I then selected all of the layers and used the Layer Align command, followed by the Merge Layer command.

The resulting image was a great improvement on that produced by method 1, but there was still some distortion of the buildings to the rear right, and  a little chromatic aberration along a couple of edges.

Some Photoshop skulduggery was able to sort all that out to produce a final photo that is 6616 x 4628 pixels in size. Printing at 300 dots per inch would result in  finished dimensions of about 22 x 15.5 ", but the quality of the original and, taking into account a sensible viewing distance, would allow a much larger reproduction were it required.

Edit - I've played around with this technique rather more now and have found that the degree of perspective correction appears to be related to the geometry of the base level shot. If your camera is completely level as you take the first shot, the software tries to mimic that geometry as it adds the layers above. While this may sound a good thing, an image without any trace of convergence of the verticals looks a tad strange, while the top layer has to be contorted rather more than might be considered comfortable in order to comply. I guess that I'm still in the experimental stage, but I am beginning to prefer a base level shot that is just off the horizontal, so that the resulting image has some degree of natural perspective after assembling all of the layers.

I've also tried the automatic panorama feature in Lightroom 6 (Right click, Photomerge), which is surely the quickest software fix for this problem, but I have not been as impressed with the results as with those that I have achieved using my venerable copy of Photoshop. 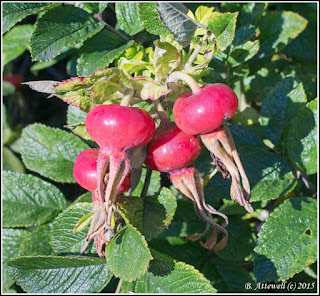 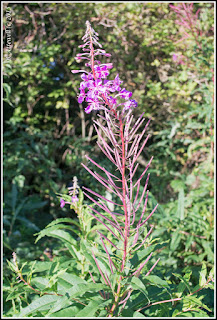 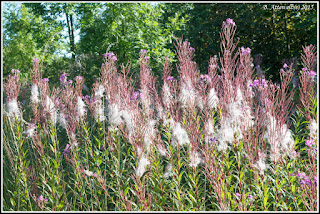 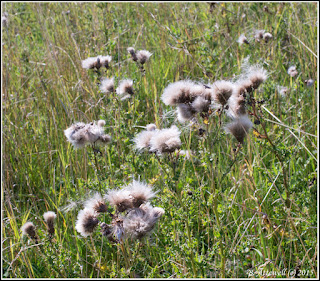 I went for a walk this morning - beautiful sunshine here in the North east - and the seeds of wildflowers caught my eye. Rosebay Willowherb and Creeping Thistle are both a complete nuisance in the garden, but, in a more natural environment, they do look rather nice!