There are relatively few steam special trains that run on the east coast main line north of York, but this Saturday morning there were three! I knew from past experience that there are few good locations to take a photograph, and used Google Earth to try and find a suitable spot. The footbridge at Chester-le-Street looked like a possibility, as it would provide a natural frame for the shot, and there should be enough light from the East to at least illuminate the side of the train. A search on Flickr and Google revealed nothing, but I decided to give it a go. 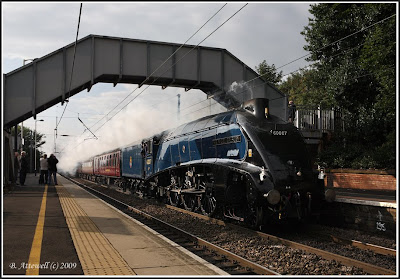 60007 Sir Nigel Gresley, the locomotive named after the chief mechanical engineer of the London and North Eastern Railway (LNER), storms through. 60007 is a member of the same class of locomotive as Mallard, which holds the world record for speed by steam traction, at circa 126 mph. 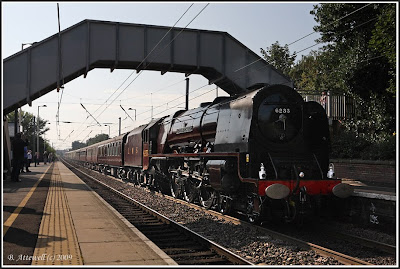 While the LNER dominated the east coast, the London Midland and Scottish Railway (LMS) occupied pole position on the west, and their chief engineer, Sir William Stanier, came up with this masterpiece. No. 6233 Duchess of Sutherland.

The third locomotive to come along that morning was British Railways standard class pacific 70013 Oliver Cromwell, but by the time that train arrived the sun would have been pointing directly at the lens of the camera at this same location, so I abandoned ship and went elsewhere.
Posted by Heedlad at 06:36