I was interested to see how the sensors compared in the two cameras. Was it indeed possible to cram all those extra pixels into the a6500 sensor without losing quality?

I set up a simple test. Both camera were configured for ISO1600, with no exposure compensation, and I fitted a Zuiko 50mm f1.8 lens. I know from previous testing that this lens will blow the standard Sony zoom out of the water, as far as the resolution of detail is concerned. The camera was mounted on a sturdy Manfrotto tripod and a 2 second delay selected. I focused with the lens wide open and at maximum viewfinder magnification, but the shooting took place at f8. Two shots were taken with each camera and the best selected for comparison - actually that was the difficult part as each of the two images taken by each camera looked to be pretty much identical.

I let the camera decide the exposure, choosing aperture priority.

The view is one within my untidy garage, and the lighting supplied by overhead fluorescent tubes. The door was open so there was also a touch of ambient light, but the predominant illumination came from the fluorescent tubes.

The a6500 chose to use 1/25th sec and the NEX 6 1/40th sec.  The histograms were quite different, with the NEX underexposing slightly and the a6500 getting it spot on.

I processed the RAW files using LR and the default setup without any further adjustment, creating 16 bit TIFFs in PS. Again no adjustments were made in producing JPGs from the TIFF files.

This is the overall view (not pretty) 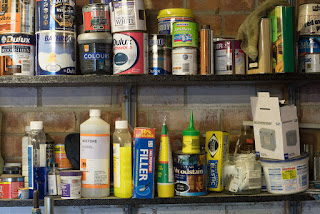 and here are a couple of crops, first the NEX 6 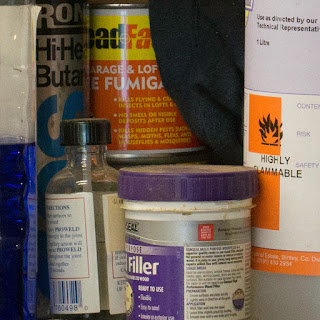 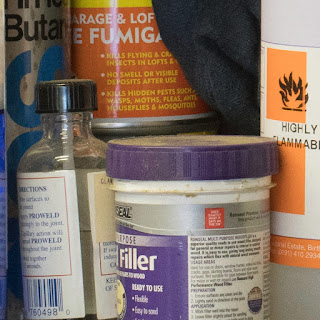 Click on any image for an enlarged view, the crops are 100% pixels.

The a6500 is recording more detail without, in my view, incurring a greater noise penalty. Look in particular at the detail in the cloth, although that may be a result of the longer a6500 exposure.

To get a better idea of the noise performance of the two cameras I have selected a couple of crops showing less detailed areas of plain tone. 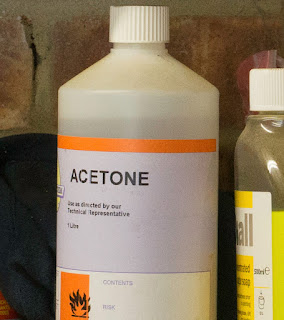 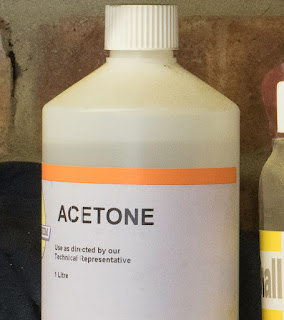 Something else I should perhaps mention, the contrast detect feature on the a6500 was usable at maximum viewfinder magnification whereas it was not on the NEX 6.

You can't read too much into this simple comparison, but, for what it's worth, the a6500 sensor does appear to come out the stronger, you get both more detail and less noise. (Oh, and before you ask, the Acetone is used to make repairs to the ABS components of my caravan, ABS is dissolved in Acetone, so you can make up a repair solution using, for example, Lego bricks.)

Email ThisBlogThis!Share to TwitterShare to FacebookShare to Pinterest
Labels: a6500, comparison, ISO1600, NEX 6, Sony, versus