I walked from Newcastle's Freeman Hospital to Gateshead, following the valley of the Ouseburn.

Once this was a major trading route from the river Tyne northwards, the valley providing a steady incline for the horse drawn vehicles of the day. Years ago the burn was enclosed in a culvert, south of Armstrong Park, and material heaped above, so blocking off the road. You can still walk the route but it involves climbing over the substantial man made barrier that stands in the way.

I had to ask for directions as I approached the covered section and was fortunate to come across a local resident who knew all of the history of the area, and who drew my attention to the site of Jesmond Flint Mill, close to where he lives. Sadly I didn't get his name, but this information and photos are down to his kindness.

The flint mill was built to grind flint, carried as ballast by colliers on the London trade. The ground material was used in the local pottery industry, presumably including the nearby Malings factory. 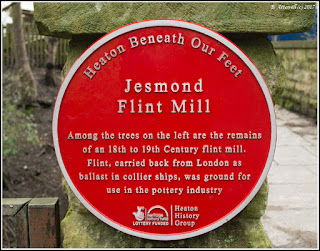 Originally the mill was powered by a water wheel, supplied by a mill race dug alongside the Ouseburn to an upstream location near Jesmond Dene. 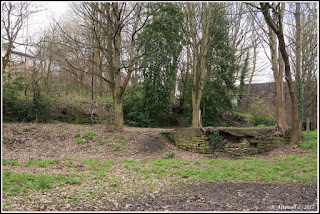 Later a stationary steam engine was installed, rumoured to have been engineered by a young George Stephenson, who was at that time employed as a colliery engineer nearby. The photo above shows the site of the mill and the plinth in the foreground might have been the engine base. 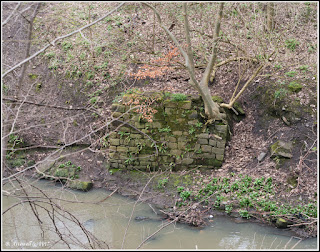 Further evidence of the mill seen in this stone wall built into the west bank of the burn. 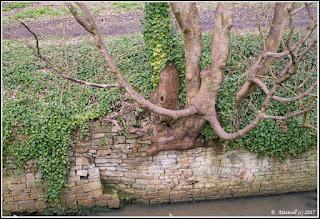 The stone arch may have been the discharge from the water wheel.