Snow on The Cheviots

Travelling on the top deck of the X1 express bus to Newcastle through the heights of Gateshead, you get a fabulous view of the city of Newcastle with the Cheviot Hills in the background. This promoted me to set out to capture a view of the Cheviots with some aspect of the city in the foreground. 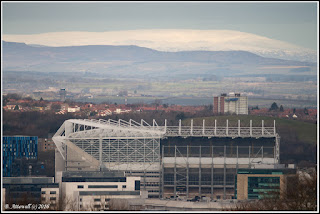 I took this shot using a Sony NEX 6 camera fitted with a 500 mm Tamron SP mirror lens, giving an angle of view equivalent to a 750 mm lens. This lens has a fixed aperture of f8. A tripod would have been a good idea, but, in its absence  I used shutter speed priority and chose 1/1000th second to reduce the effect of camera shake to a minimum. With auto ISO selected the camera decided upon ISO 250.

On the full size image you can read the writing above the entrance to the football stadium, Gallowgate Stand.