I have the earlier version of the Sigma 19mm f2.8 E fit lens for Sony. It's the only auto focus lens that I regularly use and, for the price ( I paid about £100), it does a good enough job.

Experience in long term use has thrown up a few problems.

The first is annoying rather than optically limiting. This is a budget lens and it feels it, the lens hood and rear cap are not a tight fit and irritatingly fall off. I've tried wedging a piece of loo paper between the hood and lens but that's not a good solution. I've thought of super-gluing the hood into place, but one day I might want to sell the lens and that would never do.

Very occasionally the lens fails to respond to the helm, it won't focus. Removing and replacing it has to date cured this issue, but long term, who knows? Maybe the contacts just need cleaning?

Occasionally the auto focus fails to hit the target. I've noticed this in particular when shooting a panorama, when three of the shots are sharp and one slightly out, but bad enough to be unusable. I don't know if this is a fault of the lens, or the camera, or the combination! This is the only auto focus lens that I use frequently, and maybe it's my technique at fault, but with centre point focus there's not much to get wrong. I guess that this confirms my view, that for static subjects, you can't beat manual focus.

But that brings me to another issue, I find this lens difficult to manually focus. I did think that this may be due to the relatively short  focal length compared to my older heritage glass, but I also possess a 12mm Rokinon, and that is better than the Sigma 19 mm in this respect. The image just doesn't seem to shout "in focus" as I look through the EVF in magnified view.

Then there is the business of the aperture setting. I normally use non Sony manual focus lenses that have an aperture ring. The Sigma, following normal convention for modern auto focus lenses, does not. I don't have too much of a problem with this, but what I do object to is the tendency of the camera lens combination to default to wide open, i.e. f2.8, when first attached. I've lost shots due to this in the past. I can't say that I have carried out any systematic tests, and I'm not sure if this is actually the default setting or just some random fault, but it occurs frequently enough to give me grief. I've used auto focus Sigma lenses on Canon cameras and I can't say that I've noticed this happening with that combination.

If I use my elderly 50mm f1.8 Zuiko lens, or even my old Pentax 75-150 f4 zoom, I know that, provided I get the focus right, the resulting image will be sharp from corner to corner. It's a comforting thought, I like it that way. The Sigma 19 mm falls some way short of this ideal. It normally provides crisp detail in the centre of the image, but the edges are another story. OK edge detail is rarely critical, and maybe it's the nerd in me, but this irks me.

Recently I took some shots inside an old factory that was side lit via large windows. The Sigma lens couldn't handle the strong side light, whereas my ancient Pentax 28mm f3,5 K glass was not fazed at all. OK we are comparing a 19 mm and a 28 mm lens here and the problem is probably more severe for the wider lens. Here are a couple of images to demonstrate the problem.

Left click to see an enlarged view. Compare the two. 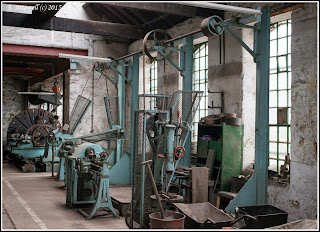 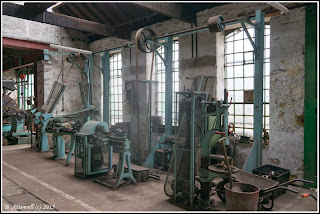 I continue to use the Sigma lens, it retains its place in my kit, but I could not use the shot above.

I've taken loads of photos with the Sigma, and other than some focusing or depth of field issues ( I much prefer manual focus as I know exactly where the point of focus is) I generally get commercially acceptable results. This lowered contrast or flare problem  has only come to light in this one situation to date, but it's a definite limitation.

Remember that I have the early version of this lens, if you buy new today you will be getting a different and, hopefully, better product.