My wife carried out a long threatened tidying of my study when two old 24mm lenses were unearthed. They are a Tamron Adaptall 2 01B f2.5 and a Sigma f2.8 Super Wide II macro. The Tamron appears to have led a hard life, while the Sigma looks to be pristine. Thinking back, I may have saved the Tamron from the skip at work!

Despite its ropey appearance the Tamron appears to be in good working order with a slinky smooth focus and aperture adjustment. Tamron Adaptalls were well constructed. The Sigma has a slightly sticky aperture ring. It all works, but you feel that it might not continue without some attention.

I did a few tests in the street using a tripod when the Tamron did not shine at all, pretty soft down the edges, while the Sigma appeared to do better than the kit 16-50 Sony zoom. I therefore took the Sigma out for a proper trial today.

The results are a bit mixed. It seems to be prone to CA, although not excessively so, and, more worryingly, it is slightly soft down one side. Otherwise it produces nice clean, colour neutral but contrasty images  that look a deal better than those produced by the kit zoom. I had considered using it in preference to my "Standard" Pentax K 28mm f3.5, but that lens produces images that are  genuinely sharp from corner to corner on the crop sensor, so it will probably retain its place on the camera.

It has to be born in mind that these older lenses may have had a hard life, so, in addition to sample variation, maltreatment over the years may have caused a bit of damage. Tamrons are normally pretty sound, I suspect that mine is not representative of the breed! 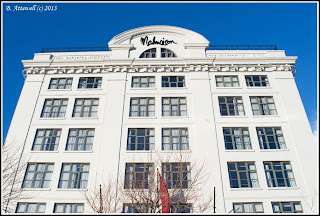 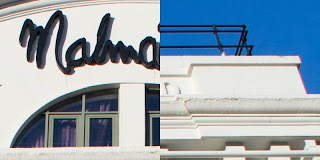 Click for a bigger image. No problems with sharpness here, but a touch of CA on the right hand edge of the actual pixels crop. To put this into perpective, it's easily removed in LR, and I've seen similar results  from a Canon L zoom. If you can source a good one, without misalignment issues, the Sigma could be a wise buy.

The Malmaison Hotel in Newcastle is located within an old co-operative society warehouse that is a listed building. It was one of the first ferro concrete constructions within the UK, and was built to the designs of a French engineer, who pioneered the technique, between 1900 and 1902.