Dangerous Junction For Cyclists in Washington

The Times newspaper has been running a campaign to identify the most dangerous junctions within the UK from the viewpoint of a cyclist. They provided an interactive map and encouraged cyclists to pin point their most feared locations. One of the junctions featured is this one on the approach to Washington from Felling, the junction of the A194(M) and the A195 or Northumberland Way. The motorway passes beneath the A195 and there is a large roundabout on that road, with slip roads to the motorway and other exits.

Traffic leaving the roundabout and joining the A195 into Washington has a very limited sight line due to the curvature of the road and a dense planting of mature trees. However, immediately after the roundabout is a pedestrian/cyclist crossing.  People crossing at this point cannot see the traffic coming around the bend, and drivers cannot see the crossing until they are upon it. 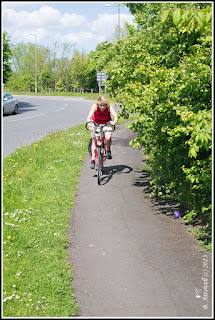 This photo shows the trees overhanging the cycle track/footpath. Click on to any photo for an enlarged image. 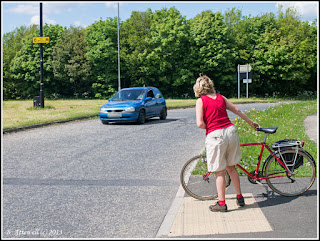 A cyclist waiting to cross, but she cannot see the oncoming traffic, which often travels at a considerable speed. 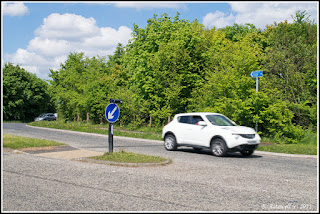 Another view of the crossing showing the problem of limited visibility.

This is a heavily used crossing, as it falls on the direct cycle route from Washington to Newcastle, which, at a distance of about 9 miles, is within easy cycle commuting range and uses what are otherwise safe paths or minor roads. It is also used by pedestrians as there is a bus stop directly adjacent to this point, and workers can access the local industrial estate from here.

Local cycle campaign groups have approached the cycling officers of both Sunderland and Gateshead councils, and have also involved local councillors, but, to date, nothing has been done to alleviate the problem. It is not clear who has responsibility for the situation, with the local councils claiming that the Highways Authority are the responsible body.

From a layman's point of view the solution would seem to be some or all of the following measures: -

1) Relocate the crossing point further from the junction
2) Cut back the trees so improving sight lines
3) Install signs warning drivers to slow down as people may be crossing the road
4) Institute a 30 mph speed limit around the roundabout and to just beyond the crossing.

This doesn't seem to be too much to ask, inaction may result in a fatality.