I have a collection of old lenses from film cameras that I have acquired over the years. You can buy these lenses quite cheaply now, and they are very usable on a Sony NEX 6 camera. Of course you don't get  image stabilisation or auto focus, but for many subjects this isn't a problem.

The NEX 6 has an electronic viewfinder, with dioptre correction for users of specs, and allows approximately 5 x and 10 x magnification of the image, so precise focusing is relatively easy. There is also a focus peaking feature, but I prefer to use that at its minimum setting as it can give false positives, and also obliterate sections of the image, making composition more difficult.

I recently ran a quick test of 4 old lenses, all standard 50mm jobs from the past. Pentax f1.4 and f1.7 and Olympus Zuiko f1.4 and f1.8. My findings were a little surprising as the cheaper f1.7 and f1.8 glass outperformed their f1.4 stablemates as far as sharpness at f5.6 was concerned.

The Olympus lenses both performed better on the NEX than their Pentax cousins in this limited test.

Here's an example of the Olympus Zuiko 50mm f1.8 in action. Not a very interesting subject I fear, the bus garage in Hexham. Click on the photos for a bigger image. 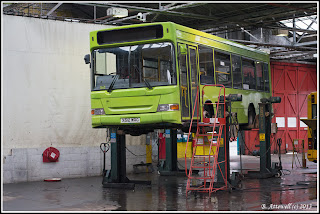 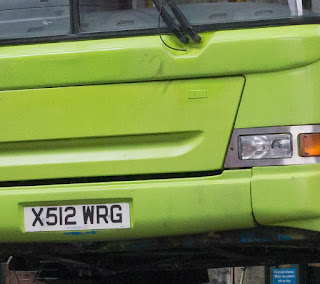 The 100% crop. You can read the word Plaxton at the bottom of the number plate.

This 50mm f1.8 Zuiko lens was bought, with camera attached, for £10. It's comfortably sharper than the zoom lens supplied with the NEX camera, but, nothing like as convenient to use.